Apart from the RPG figure painting, the other kind of figure painting has been made popular by the renaissance, neoclassical as well as the contemporary figure painters. Art is very interesting, especially when it is about representing people on canvas and bringing their figures out perfectly in oil or water colors. Over time, many figures have been painted but none have been more popular than the mythological or religious figures that never fail to captivate. From the skillful hands of maestros like Da Vinci, you can be sure that these paintings are eye candy for the entire world.

Here are a few of them:

Adam and Eve by Durer

Can you believe that this painting was completed in 1507? It is said that Albrecht Durer painted this painting after arriving to Nuremberg in Germany from Venice and that is why many connoisseurs say that this painting has a touch of Italy in it. Being a very popular painting of its time, it soon came to be a collector’s item, hoarded by kings until it found itself in Spain’s Museo Del Prado.

Oedipus and the Sphinx 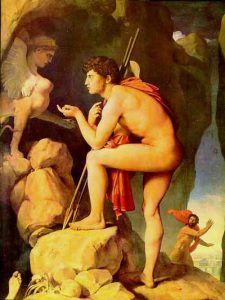 If ever there was a figure painting that brought out so much intrigue and love on the canvas, it is the Oedipus and the Sphinx painting done by Jean Auguste Dominique Ingres, a neoclassical artist from France in 1808. It is a very thought-provoking painting that shows Oedipus telling the riddle to the sphinx. It seems to flow with life and today, it is at home in the Louvre. It has been there since 1878.

This painting was done by Lucas Cranach the Elder somewhere between 1530 and 1534. It is a very interesting painting that depicts some nudity as you can guess from the name. as would be credited to Cranach later, eroticism would become part of his paintings later on. He also painted mythological scenes which would change how classical mythology was interpreted. This painting is now displayed at the Museo Thyssen-Bornemisza in Madrid. 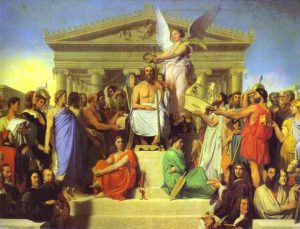 This 1827 painting was done by Jean Auguste Dominique Ingres and it shows a symmetrical figure of Homer as he is crowned by a figure that has wings. It also shows poets, philosophers and artists surrounding Homer. While the then modern artists got the lowest section of the painting, Michelangelo and Raphael can be seen amidst the ancients showing that Ingres considered them worthy of such a high position. This painting is now displayed in the Louvre.

This famous painting was done by Titian and was completed in 1570. This painting has been interpreted differently by many people, but the one thing they all agree on is the way it depicts music as the tool of love and the key that opens the gates of hearts of women. Many art specialists say that this painting was the culmination of Titian’s Reclining Goddess series of paintings.

Mythological and religious figures always intrigue people and perhaps that is why the masters of long ago depicted them on canvas so much. All of the pieces of art mentioned here are very expensive today, but the value actual value is the feeling in your heart once you see them.